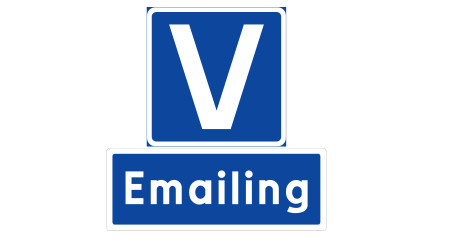 VUnit 3.0, our next major release, is around the corner and with it comes a number of updates and additions. One area which we have improved is our support for creating advanced bus functional models (BFMs). This includes an update of our communication library, additional support functionality and also a number of complete BFMs. This post will focus on the communication library, how it’s used to build advanced BFMs, and how we made it as simple as emailing. To emphasize the email analogy I will conclude the post with a demonstration where I use real emails to communicate with a simulation.

The write procedure takes an address and a data word and then performs the pin wiggling needed on the bus interface to complete the write transaction. The basic BFM provides abstraction by hiding how the pin wiggling is done and it makes the test sequencer very readable as depicted below. First the device under test (DUT) is initialized using the blue interface, then some data is put on the green port, then there is a write access on the red bus interface. Crisp and clear as a recipe. 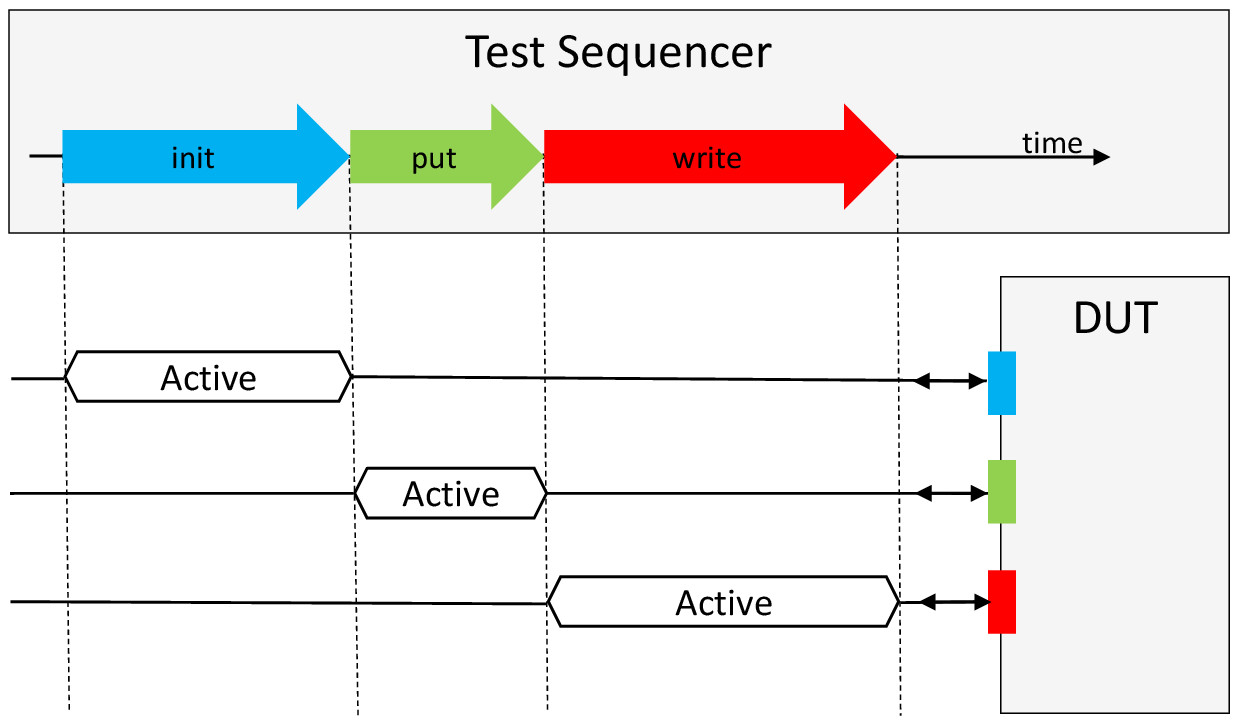 However, looking at a real recipe we can see an important difference

The recipe is sequential in nature but actually describes concurrent activities. You’re expected to do things while the oven is preheating. This type of concurrency is something that the basic BFM approach cannot describe.

While it makes sense to initialize the example DUT first you should also verify what happens when the red and green interfaces are used in parallel. The advanced BFM approach will let you do that and just like the recipe solves the problem by having several actors (you and the oven) the advanced approach makes use of several BFM components, one for each interface. These components run in parallel and perform the pin wiggling on command from the test sequencer which remains the recipe providing overview and readability.

Now that the pin wiggling has moved to the BFM components these procedures just initiate and optionally await the completion of that work as shown in the figure below. Procedure calls that only initiate BFM work will return immediately without consuming any simulation time. This allows the concurrent execution of the put and write transactions. Procedures like init, which await completion, will be blocking and consume simulation time. 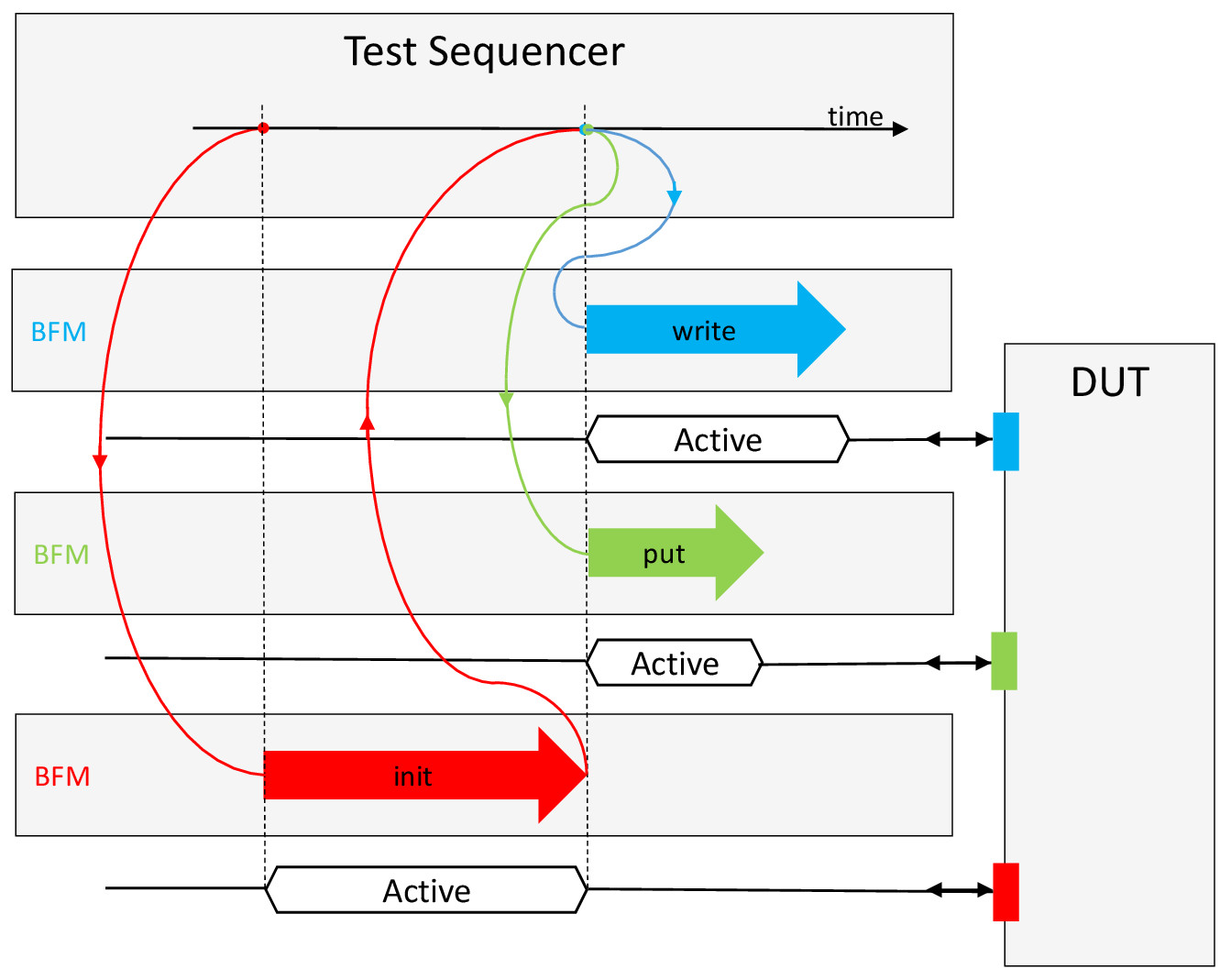 No Need to Reinvent the Wheel¶

Fortunately we’re not the first to deal with communication in concurrent systems and computer science already has a mature solution for this - the message passing paradigm. Message passing is available in numerous programming languages so there is no lack of good examples to be inspired by. The real challenge is to create something equally user friendly in VHDL. So how do we measure user friendliness? For me, the reference has been email clients. The message passing we’re talking about is very similar to basic emailing functionality and considering that it takes a minute or two to figure out the basics of a new email client I think that’s the interface experience to strive for.

Let’s look at some code and compare the sequence of events with those in an email thread. In this example my test sequencer is communicating with a BFM connected to a bus of a pure memory device. For reasons that will appear later I’m calling this device The Brain.

First of all, to receive an email you need to sign up for an email account to get an email address. Same thing in message passing but we talk about actors rather than accounts. Anyway, you can think of the brain constant below as an email address. The test sequencer is really communicating with the BFM but that’s just a technical detail which I’ve excluded from the naming.

The test sequencer may have direct access to the brain “email address” but it can also figure it out.

Now that the basics are covered we can start communicating. This is how you send a message to the brain BFM instructing it to start a write transaction.

Just as you click the new email button in your email client you start by creating a new empty message in VUnit.

An email has an optional subject and so do VUnit messages but we call it a message type and it’s an optional parameter to new_msg. It would be possible to use a string like “write” for the subject but that can cause a problem if you have several BFMs supporting write transactions and use the publisher/subscriber pattern. I will not cover that pattern in this post but it basically allow you to subscribe to messages published by a number of publishers. The parsing of these messages becomes much harder if messages with different content is allowed to have the same message type. To handle this a BFM can register its message types and get unique identifiers in return.

When writing an email you add text but you can also attach pictures, documents and other objects of different types. Same thing with my address and data which are of different types. The reason for pushing things into my message is that I’m using the message as a queue. The first object pushed on the sender side is the first one popped on the receiver side.

Finally I add the email address (brain) and click the send button to send the email (write_msg) over the Inter(net).

Compared to a basic BFM procedure there is only one interface signal, net, which means less typing and no changes if the physical DUT interface is changed.

The BFM receiving the test sequencer messages would have a process with a body starting like this.

Do you pick up the phone right away at the sound of a notification? If so, you’re like this BFM blocking on the receive procedure until a message arrives to the brain account (the BFM can have many accounts). Based on the message type and the message contents the BFM takes suitable actions much like you would when receiving an email. Note that this is the place to reuse your basic BFM procedure presented earlier in this post.

Replying to an email is just like writing a new email. The only difference is that you start from the incoming email, thereby creating a reference to it. Same thing with VUnit message passing. Below is the continuation of the if statement above showing how the BFM replies to a read command.

Even if you react to every email notification you receive you may choose to leave most messages for later and just read the important ones, the emails you’ve been waiting for. In the following example I do just that. First I initiate a read transaction and then I await the reply of that message and ignore everything else. Messages ignored are not deleted but remain in the inbox until you are ready to read them.

Again, these are details that the test sequencer doesn’t have to see. The first three lines can be encapsulated in a non-blocking read procedure brain_read that lets you do other things while waiting for the data to be returned. The last two lines can be encapsulated in a procedure get that gets the actual data. The link between the two procedures is read_msg but that name also leaks implementation details so I’m calling it future instead. brain_read returns a promise of future data and get retrieves that data and may block if the data is yet to be received.

Sometimes you just need a blocking read so a procedure bundling these two should also be provided.

The difference between the two brain_read procedures is the type of the last parameter.

Can It Be Made Simpler?¶

Everything should be made as simple as possible, but no simpler.

As you can see there is almost a 1-to-1 mapping between VUnit API interactions and the GUI interactions in an email client. Is this as simple as can be? If emailing is the ultimate form of simple communication it would be, but it’s not.

You may have noticed that I never created an actor for the test sequencer so all messages to the brain have been anonymous. Allowing such messages means one less thing to be concerned about but it’s not part of normal emailing. You can make it more like emailing by signing your messages with a test_sequencer actor.

If you do, all reply messages sent by brain will end up in the test_sequencer inbox. If you don’t brain will act like an email client that has lost its network connection - it will store the reply message in its outbox. When the test sequencer waits for the reply it will know that the outgoing message, read_msg in the example below, was anonymous and rather than waiting for a reply to appear in its inbox it will look for the message in the brain outbox. No privacy but we don’t really need that.

Sending Real Emails from within a Testbench¶

To further emphasize the similarity with emailing and also show some other aspects of VUnit message passing I’ll end this post with a demo of a VUnit testbench interacting with a real email client. The demo is a continuation of the previous example but instead of a simulated brain within the simulator I’m putting the brain inside my own head and use GMail for communication.

The value of sending emails from within a simulation may be limited but there are other more interesting situations where you need external communication and where message passing provides a good abstraction. But that’s a story for another time.

NOTE: This demo recording was based on a release candidate for VUnit 3.0 in which the new_msg function didn’t have the message type parameter and there was no message_type function for the receiver. Instead the message type was pushed/popped to/from the message just like any other message content. This is still possible but not the recommended way of doing it. The newer approach provides better debugging support as described in the user guide.